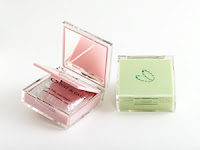 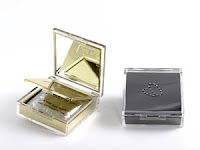 Cute compacts, right? Well, thanks to the dynamic mother-daughter duo of Marsha Bartenetti and Rachael Sudul of Just In Case Inc, these compacts are actually chic condom cases!
Last week, I had the opportunity to talk to half of the team, Rachael, and our conversation covered how everything from social norms to education affects what we do as women when it comes to protecting ourselves. We also chatted about how the company was formed and the challenges faced by women on the sexual health forefront.
The idea first came to Marsha in the 1980s, after a conversation with a friend on the need to move condom use more into the mainstream. As you can imagine, things were definitely different 20 years ago. Afterall, this was before Tom Hanks moved us in Philadelphia or 4 single women stole our hearts with their tales of sex and dating in Sex and the City.

So, Marsha put the idea on hold until 2003, when the societal winds shifted. Statistics were revealing that women, especially minority women, were now representing a significant amount of new HIV/AIDS cases. Not to mention, pregnancy and STD/STI rates were increasing among teenage girls. Now, not only were Americans talking about safe sex, but they were listening. Marsha joined forces with Rachael, and voila! Just In Case, Inc was officially born, with sales of the compacts happening over the past year and a half! 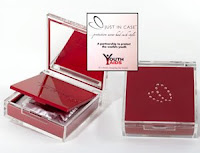 I was initially drawn in to Just In Case by their product offerings, but after reading their philosophy, it became clear that these women simply “got it.” They understood how society made women feel, and their product took a step towards addressing some of the underlying issues and challenges affecting women’s sexual health and well-being.

It is our belief that although a woman may be sophisticated, smart, sexy and forward thinking in her world, beneath the strong exterior lives a woman who is innately modest, and has a desire to be loved and respected; a different kind of strength.

Often, situations arise where self-betrayal replaces self-knowledge with the belief that having unprotected sex will please her partner and begin or keep a relationship going; all of which could put her life at risk. Furthermore, the idea of purchasing condoms herself or carrying them in her purse where others may see them, might be just too embarrassing. Or she may feel judged for having them in her possession.

Protecting ourselves is our right. We should never be embarrassed about taking care of ourselves. Not for one second.

If you are interested in “loving wisely,” Just In Case is offering a great deal to you, our Red Pump readers. When you purchase a compact from the website, enter in the code “REDPUMP” to receive 10% off your purchase! These also make great gifts, so consider getting one for your sister, girlfriend, or whomever. You can’t beat the discount nor the free shipping (for orders over $50).

Also, worth mentioning…A percentage of sales from the red compacts will benefit YouthAIDS, an education and prevention program which uses media, pop culture, music, theatre and sports to stop the spread of HIV/AIDS and reach 600 million young people in more than 60 countries.

For our readers at nonprofits, Just In Case does sell compacts to NPOs, so if you are interested in securing some for a benefit or workshop, please reach out via their website!

To learn more about the company and their work in the community, please visit www.justincaseinc.com!