Today is World AIDS Day, an annual commemoration of the impact of HIV/AIDS around the globe. This is the 21st anniversary of WAD, so the day has come into its own, as full-grown. However, HIV/AIDS was discovered in 1981. Since then, it’s claimed the lives of over 25 million people globally. 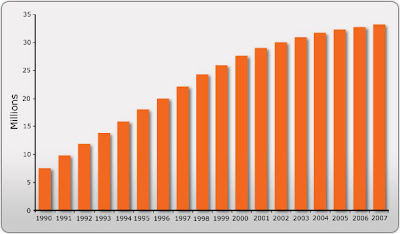 
The number of people living with HIV has risen from around 8 million in 1990 to 33 million today, and is still growing. – UNAIDS

This year’s WAD theme is “stigma and discrimination.” Almost 3 decades into the HIV epidemic, there is still stigma surrounding it. It’s important for us to kill the stigma that’s associated with HIV/AIDS in order to move forward in fighting it. We have to learn to speak candidly about the issues surrounding it so we can find the solutions. HIV is the most deadly disease in the world that isn’t contagious, malaria OR cancer.

I hold The Red Pump Project so close to my heart, and pour myself into that work as a result of this. I feel like I’ve found my purpose, and the reason I was put forth here. Educating folks about the disease and its impact. My hope for those infected with HIV is that they live well with it, leading prosperous lives in spite of the disease. My hope for those who aren’t HIV-positive is that they remain without it. I truly want for this disease to stop it’s spread.

HIV is nature’s oxymoron. Sex is supposed to bring forth life, but now, it can potentially destroy it. Let’s ALL stay safe. Know your status. Get tested. Drop the stigma.

I will continue to Rock the Red Pump (TM) in honor of the impact HIV/AIDS has around the globe.

P.S. To those in Chicago, we’re having an event tomorrow, Dec. 2nd, called “Say RED… Cocktails and Conversations.” Come join me and a bunch of other awesome folks for an evening of sushi, cocktails, good convo and good times as we discuss HIV/AIDS. Bellas, Rock your Red Pumps. Fellas, Rock your Red Ties! More information is HERE.